Concerns about damage to the environment, and exposure to industrial power generator noise continue as the community ponders options

As seems to be typical for the Ministry of the Environment and Climate Change, the announcement of a Renewable Energy Approval (REA) for the controversial “Nation Rise” wind power project came late in the day last Friday, May 4.

The project has a nameplate capacity of 100 megawatts of power. Ontario currently has a surplus of electric power for the foreseeable future, the Independent Electricity System Operator (IESO) has said, but approved five more contracts in 2016, regardless.

The community group, Concerned Citizens of North Stormont, is worried about the impact of turbine construction on the aquifer and local water wells, especially following the failure of 20 wells in the Chatham-Kent area during construction of the North Kent Wind power project. The geology there is fragile Kettle Point Black Shale; independent hydrogeologists have said the vibration from pile-driving disturbed the shale and now wells are clogged with shale particles. The shale is known to contain toxic heavy metals such as arsenic.

In the Nation Rise project area, the hydrogeology is not shale but there are concerns nonetheless; in fact, almost all of the turbines are planned in an area designated “highly vulnerable aquifer.” (See map, below)

And, in spite of just receiving approval late Friday, the company has already done pile-driving for the project, without a formal construction plan or indeed, a formal Notice To Proceed from the government.

The community group has 15 days from the approval announcement to decide whether to appeal.

To contact Concerned Citizens of North Stormont, go to: http://concernedcitizensofnorthstormont.ca/ 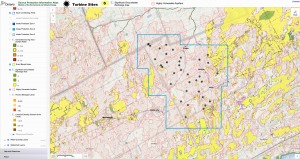