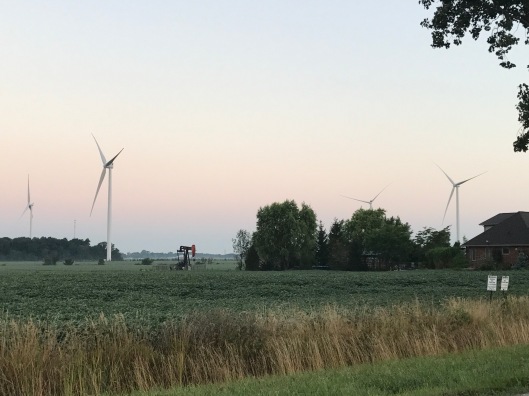 Friday October 6th, 2017 was a work day just before the Thanksgiving weekend. At 10 AM that morning, Ontario’s electricity ratepayers had much to be thankful for. Power generation from wind amounted to just 27 MWh, but that 27 MWh wasn’t really needed as nuclear, hydro and a little gas were providing all the power we needed.  And, both hydro and gas were capable of producing lots more if Ontario demand required it.

The hourly Ontario energy price (HOEP) during that hour was $13.50/MWh (megawatt hour) so the value of the 27 MWh that wind produced in that hour cost ratepayers about $365.

Two days later, Thanksgiving Sunday was a different story: at 3 AM wind power was working in the night, generating 1,145 MWh with another 2,797 MWh curtailed (wasted, held back, not added to the grid). Ontario’s ratepayers were paying $135/MWh for the grid-accepted wind and $120/MWh for the curtailed wind.

The HOEP was a negative $3/MWh so the grid-delivered wind was costing ratepayers $415.95/MWh or 41.6 cents/kWh! In total, that one hour cost ratepayers $476,274 for unneeded generation. On top of that, because Ontario demand for power was low (most of us were fast asleep so the LED lights were out), Bruce nuclear was steaming off excess generation (we pay for that), OPG was probably spilling water (we also pay for that), and we were exporting 2,802 MWh to Michigan, New York and Quebec and picking up the $3/MWh cost.

This is more proof that wind power is produced out of sync with demand.

The time has come to stop all contracting for additional wind generation and to cancel any that are not under construction.

2 thoughts on “Wind power: out of phase with consumer demand”