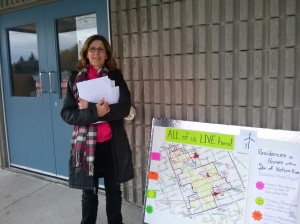 The local population has made it clear they are not in favour of the giant wind power project, which will cost the people $3.3 million over the 20-year contract with the IESO, and add more to everyone’s electricity bill.

For power that Ontario doesn’t need.

People attending had some questions for the developer that may have been tough to answer. Some examples:

The Draft Project Description Report, under Wind Turbines states that the hub height will be anywhere from 100 to 140m. This is significantly higher than the 100m towers at your South Branch Wind Project in Brinston, where residents have filed complaints.

How will the proposed 132m height affect the transmission of noise across our flat, relatively non-forested terrain and how will it differ when there is a hard ice/snow covering on the frozen ground and no leaves on the trees, a condition often found between late November and early April in North Stormont?

In your noise report, you use a global ground absorption factor” of 0.7.  This number is supposed to reflect the worst-case scenario, in our case when surfaces are hard/non-absorptive, like those we see repeatedly in winter, when the ground is frozen and following ice rain events (6 or more this past winter).  Why have you not included a more accurate “0” absorption factor, which is our “worst case” scenario, or something closer to it, which reflects local conditions in North Stormont?

Who are the engineers referred to in Section 3.2.6 of your “Site Considerations” Review? Will they sign, without “qualifying” their report, and assume professional responsibility for all information provided?

Given that over 3,200 noise complaints were officially documented in Ontario from 2006-2014, (just as EDP’s South Branch was brought on-line) and from your prior experience internationally, how have you addressed noise and health complaints?

Community members were particularly concerned that EDP, even though this was the last community event, still could not provide information on the exact equipment to be used, and how many turbines there would actually be in the project that could have as many as 34 50-storey structures.

For more information or to provide support and donations for possible legal action, contact the Concerned Citizens of North Stormont here.

1 thought on “Hard questions for wind farm developer in Finch”