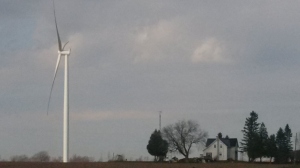 3-MW turbine south of Ottawa at Brinston: Ontario. Communities have had no choice. [Photo by Ray Pilon, Ottawa]

Rideau-Goulbourn councillor Scott Moffatt wants the City to be able to have a say on where future wind turbines are placed.

He’s tabling a report at Thursday’s Agriculture and Rural Affairs Committee meeting, recommending Council ask the Province of Ontario to change the law, to give municipalities “a substantive and meaningful role” in deciding where future wind power projects will go.

The report says municipalities deserve a role in the process, because “the siting of wind power projects has local planning implications” and decisions on renewable energy projects need to take place “within the context of community sustainability.”

The report further states that early municipal input should not only be a priority for proponents of new wind projects, but it should also be a deciding factor for Ontario’s Independent Electricity System Operator (IESO) when approving a new project.

Currently, the Province has sole jurisdiction over where wind farms are located.

If the recommendation is approved, full City Council will vote on whether to send their concerns to the Provincial government, the energy minister, the IESO, the Association of Municipalities of Ontario, and all municipalities in Ontario.

The Agenda for the ARAC meeting May 5 is here.

EDITOR’S NOTE: The community of North Gower presented a petition to  Ottawa City Council in 2013 asking for recognition as an “unwilling host” to a proposed wind power project that would have been close to thousands of residents. Council passed a motion unanimously asking the Government of Ontario to return local land-use planning power to municipalities. The government gave no response to Ottawa, Ontario’s second largest city.