Smaller project gets the nod in unwilling host communities 2016, while larger power project simply has to resubmit 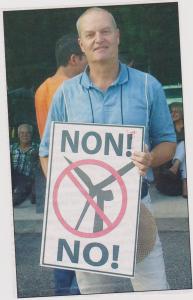 Sixteen new green energy projects across Ontario, five of them wind turbines and 11 solar farms, were approved by the provincial government on March 10th.

That will mean 35 to 50 windmills, depending on their size, says North Stormont mayor Dennis Fife.

They are slated to be hilt about one kilometer west of Finch and head north, just west of Berwick and Chrysler [Crysler], said Fife. For those visiting last fall’s plowing match in North Stormont, the southern end of the project will be about where the event was held.

“We don’t know the farmers who signed the leases,” said Fife.

Being picked was a surprise since the Premier and area MPPs had publicly assured them that no such project would be “forced” on areas such as his, that had declared at council that they were “unwilling hosts,” said Fife.

Wind Concerns Ontario noted in a press release that four of the five windmill projects approved for this round were slated for municipalities that had declared themselves “unwilling hosts.”

WCO also predicted that the windmills just approved under this round will cost consumers $1.3 billion over the next 20 years.

..In nearby St Bernardine, windmills were approved for the 32,000 MW [Correction:32 MW] Gauthier Project in this round, but the adjoining proposal in the same county of over 100,000 MW [Correction:100 MW] in St. Isidore was not approved.

However, a day after the announcement Steve Dick, who had helped lead the massive protest against both projects in his county, was not celebrating.

“We’re a pretty disheartened group right now,” he said. “They pretty much steam-rolled over the township.”

Since the Gauthier project was approved, the wiring infrastructure they neded to install will be dovetailing, as planned, with the soon-to-be-approved St. Isidore project, he predicted.

[Editor’s note: Sorry, this article is not available online. We object to the use of the term ‘windmill’s–these machines are industrial- or utility-scale wind turbines that are used to generate power.]