Although not to be televised until Thursday, and then only for Rogers TV subscribers, the Ottawa Citizen carries a report on the debate in today’s edition, on page A 3.

Liberal candidate for Nepean-Carleton Jack Uppal said the Liberal government has “done very well over the last 10 years,” according to the report, by Don Butler.

PC incumbent Lisa MacLeod responded by saying that Ontario has the highest annual deficit and most accumulated debt of any province. Since the Liberals took office in 2003, the number of public sector workers has grown by 300,000: “Their plan is not workable. It’s not achievable.”

Ric Dagenais took issue with the Million Jobs Plan put forward by the PCs while Green Party candidate and Kars resident Gordon Kubanek said voters are tired of LIberal overspending but don’t like the Conservative plan to eliminate 100,000 jobs.

The candidates debated electricity bills and MacLeod blamed the Green Energy Act and the “bloated bureaucracies” at Hydro One and Ontario Power Generation.

Dagenais spoke on traffic congestion; Uppal said his party supports mass transit initiatives, which MacLeod added her party would “fight” to ensure Ottawa gets its fair share of funding for transit.

In the article on the proposed wind power project for North Gower-Richmond appearing in today’s Ottawa Citizen (http://www.ottawacitizen.com/business/Wind+power+projects+harmful+cancelled+plants+critic+contends/8678755/story.html), wind power developer Prowind (based in Germany) representative Rochelle Rumney says the project is “on hold” until the new application process is announced by the Government of Ontario.

Taking a cue from the province, which is making lots of noise about “community engagement” while still NOT returning local land-use planning powers removed by the Green Energy Act, Rumney told the Citizen writer that Prowind wants to work with the community to “try to have everybody be comfortable with the project.”

How do we get “comfortable” with the fact that Prowind has concealed the true locations of the turbines and to this date, does not depict the turbines just north-west of a housing subdivision on its website?

How do we get “comfortable” with the fact that by conservative estimates (and this has been accepted by the Ontario Superior Court of Justice) property values could decline by 22-50% ?

How do we get “comfortable” with the fact that, again by conservative estimates, if only 10% of the residents within 3 km of the turbines were to experience sleep disturbance and other health problems, that would mean over 100 people could be affected?

How do we get “comfortable” with the fact that a few people who live here can do this to the rest of their community?

This community has options, none of them comfortable, but they will be pursued.

Just a reminder of who we’re dealing with, here again is the photo of Prowind’s stunning Head Office in Hamilton, Ontario. 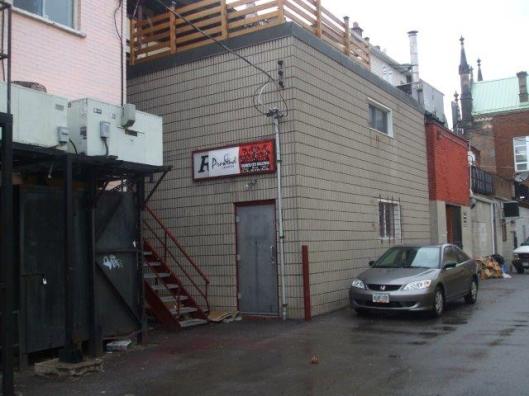 An Ottawa-area reader wrote to the Ottawa Citizen, in response to a totally city-centric column by writer Kelly Egan, in which the columnist said he likes the Feed In tariff program because he thinks it helps small, local energy initiatives. So, so wrong.

If only the FIT program had done that, there actually would be jobs, there actually would be energy savings…but that’s not what happened—the subsidy program was created for the giant corporate wind power industry. The rooftop solar panels Mr Egan so likes to see from his “bedroom window” in the city have almost nothing to do with it. On the other hand, the people of rural and small urban communities will have their lives changed for ever by the advent of huge wind power generation projects. Here is the letter. Note how the writer also describes what he has seen in his European travels—what Ontario is doing is not like anything elsewhere.

Too close to residences

Reading columnist Kelly Egan’s article on the touchy subject of wind turbines, I just felt sick to my stomach.

Having a residential property adjacent to a farm where an industrial wind turbine project is in the works makes me a stern opponent of this kind of project. It is costly, detrimental to health and a threat to the value of my property.

I invite Egan to switch places with me and watch his lifetime toils evaporate just for the sake of enriching powerful lobbies of already rich people.

It is a shame that our government insists on disturbing and ruining people’s lives by allowing such projects so close to residences. Our beautiful province is so vast and for sure this kind of project can be built in remote areas where people’s lives are not affected and the enrichment of the government’s friends can continue with us footing the bill.

I have visited many countries where wind turbine parks were nowhere close to any residences nor farms. Even in Greece where bribery can seemingly get you anything, such projects are built far away from inhabited areas.

I wonder what it took to convince our politicians that building them close to homes is good for everyone. I feel so powerless in a country like Canada where the person is valued – but it appears that our politicians do not adhere to this notion.

Donations welcome to help us with legal fees and other expenses. PO Box 3 North Gower ON  K0A 2T0

In today’s Ottawa Citizen, a report from Don Butler on the rise in rates for power from Ottawa Hydro. Here’s a comment from someone whose opinion we regard highly, Robert Lyman, former Director-General, Environmental Affairs, with Transport Canada.

The Citizen story is here: http://www.ottawacitizen.com/technology/Modest+Hydro+Ottawa+increase+masks+steep+rise+electricity+rates/7797528/story.html

It tells only a small part of the story, of course. The focus of the article was on the effects of time-of-use rates as compared to delivery charges, with just a passing reference to the taxpayer subsidy that will expire in a few years. The other way of presenting the increases is in terms of the average costs of electrical energy minus the delivery (transmission and distribution) charges. Those increased 85 % from 2005 to 2011 and were projected by Ontario Power Generation to increase another 46% from 2012 to 2015. There are good reasons to believe that the 46% figure is an under-estimate.
More important, the article did not explain why costs are increasing so much, when demand is falling. The answer lies in much higher costs now being paid for new generation sources like wind and solar and the expensive energy “conservation” programs. The effects of these costs are just beginning to be felt. As industrial wind turbines become a much larger share of generation in future, the cost increases will accelerate.
Add to this the costs of implementing the “smart meters” program, which is probably in the range of $2 billion province-wide for the meters and local distribution costs alone, and the huge costs of expanding the transmission system to pick up all the disparate source of electricity generation from wind, and you have an electrical system headed for major rate increases for the foreseeable future.
We as taxpayers are providing a huge subsidy so that we as ratepayers will be lulled into thinking that the electrical energy system is all right. Unfortunately it isn’t.

We would add to this a repetition of the results of a Library of Parliament analysis of the wind power project planned for the south-west rural area of Ottawa, as requested by Nepean-Carleton MP Pierre Poilievre. The research found that the subsidy for this particular project would be on the order of $4.8 MILLION per year.

Email us (join us!) at ottawawindconcerns@yahoo.ca

Yesterday, writer Kate Heartfield, who claims to live in the south Ottawa area near to the proposed wind power generation project, published an opinion piece in the Ottawa Citizen that she thought was a colossal joke. Doing absolutely no research herself on the whole issue of wind power generation, she took aim at Nepean-Carleton MP Pierre Poilievre for what she felt was inadequate references for the petition he circulated to constitutents last week.

(The petition states that there is evidence for health effects from wind turbine noise and vibration and that Health Canada is now doing a study; Premier McGuinty of Ontario ought to halt approvals on the North Gower-Richmond project until results of the study are in. For a copy of the petition, please see our documents tab.)

She also claimed that the group of international scientists working on this issue were “amusingly” named the Society for Wind Vigilance  ( a five-minute read would have revealed what an important group of scientists and health care professionals that is), she denigrated well-known and peer-reviewed independent health researcher and former health policy analyst and editor Carmen Krogh as “a retired pharmacist” and finally, claimed that for 20% of the population to have health effects from wind turbine noises was neither here nor there.

If you are a regular reader of these pages and our former blog the North Gower Wind Action Group blog, you’ll know what a puff piece Heartfield’s article was–there is plenty of evidence to show that there are health problems, and that research needs to be done to develop policy for health and safety because, clearly, Ontario’s 550-meter setback based on noise modelling (not reality) is not safe.

Our final comment is, Since when is a health issue the basis for humour? We note that it took just nine complaints about Jeeps in the U.S. to result in a recall of hundreds of thousands of vehicles. Now you have hundreds of noise complaints in Ontario, and yet the government still approves these projects? How many people have to become ill before it is too much? And before people like Kate Heartfield can take seriously the damage that is being done?

We are grateful for the continuing support of MPP Lisa MacLeod and MP Pierre Poilievre. Thanks too to all those who wrote in and congratulations to writers Mike Baggott, Judi Atkinson, Francesco Macri, and Henri Garand, for having been published in the Ottawa Citizen today.