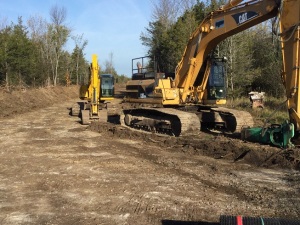 At its first mandatory Community Liaison meeting held this past week in Crysler, Portugal based power developer EDP announced that construction will begin soon on the 33-turbine, 100-megawatt wind power project that will cover the communities of Finch, Crysler and Berwick.

In a story published by the Cornwall Standard-Freeholder EDP spokesperson, Toronto-based Ken Little, said that the first step will be clearing of trees, and construction of access roads for the turbines.

While the turbine type and size was not specified in documents filed with government at the time of application for the Renewable Energy Approval, Little said they will be German-built machines, built to a maximum height of 200 metres or 656 feet.

The Peace Tower in Ottawa in 321 feet.

Little was also asked if the company will be employing local workers during construction, but he said he could not guarantee that.

Wind Concerns Ontario, however, estimates the property value loss for properties exposed to the noise and visual effects from the huge turbines could be in the millions, which could in turn have the effect of forcing the municipality to raiser taxes.

The power project could be operating by December of this year. It is estimated to cost the people of Ontario more than $380 million over 20 years; the Independent Electricity System Operator (IESO) said in its power supply forecast last fall that Ontario does not need any new power generation at this time.

Community group Concerned Citizens of North Stormont launched an appeal of the power project based on concerns about the impact of turbine construction and operation on the aquifer in North Stormont, which is designated as “highly vulnerable” and on safety and health concerns. The appeal was dismissed but the group said recently it is considering all other option, including a further appeal.