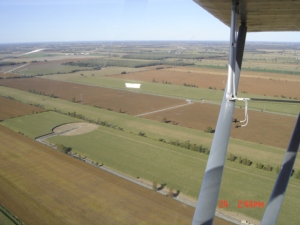 Construction of one of the 3-MW turbines at Brinston, now operating–30-50 more proposed by EDP Renewables

Ottawa Wind Concerns has learned that a “Charge of Lease” has been placed on the South Branch wind “farm” in the amount of $70 million. The charge is on the leasehold interest in five properties, where property owners have leased land for wind turbines, access roads, substations, and other parts of the wind power generation project.

Earlier this month, details came to light on the 140-turbine K-2 project near Goderich, Ontario, where a charge of lease has been filed on the title for 100 farm properties, in the amount of $1 billion.

The Charge of Lease is basically a financing agreement between a lender (who may represent investors in the wind power project) and the wind power developer, that can function as a line of credit. The basis for the Charge, as we understand it, is that the present value of the contract for the turbines, i.e., the Feed In Tariff contract for power with the Province of Ontario is greater than the present value of the lease agreements with the landowners; the difference between those two values is the security for the loan.

The South Branch contract with the Ontario government runs for 20 years and is worth millions to the developer, who bought the project from Germany-based Prowind.

The importance of the existence of these agreements is the effect they have for the landowner leasing land for the wind turbines. In the opinion of a lawyer advising us (who prefers the term “Demand Debenture” for this arrangement:

It’s not so much that the farmer lessors might on default lose their land (the land itself is not mortgaged, just the turbine contract on that land) but the damage it does to that farmer if he/she wants to sell or to renew an existing mortgage, or place a new one or in any way borrow money for which the lender would want security on his/her land.

Assume a binding Agreement of Purchase and Sale. The lawyer for the purchaser does a title search and discovers the Demand Debenture. The lawyer would immediately tell his/her client that the client is entitled to get out of the deal unless the registration of the Demand Debenture is removed from title, and would also insist to the farmer’s lawyer that this be done otherwise the deal cannot close. A purchaser is not expected to assume any risk of this nature nor to be in the position of “buying a law suit”.

in the case of renewing an existing mortgage or placing a new one, the lawyer for the Bank or other lending institution would take the same position – no renewal or new mortgage unless the customer sees to it that the Demand Debenture disappears from title. Period. End of story.

This is another example of the very serious questions that need to be asked by anyone considering leasing their land for a wind power generation project. There are many serious and long-lasting effects to signing these agreements that need to be properly understood.

In 2013, the Not A Willing Host group of municipalities met in Ottawa at the Association of Municipalities of Ontario convention. At that meeting, one Ontario mayor said, What people need to understand is that basically, they sold their property for the amount of the lease agreement.

** Please see also, the article from the May 5th edition of Ontario Farmer on the charge of lease issue, here.